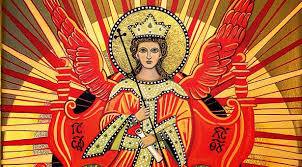 According to one Gnostic myth the shaping of the material world was the result of Sophia, who was often decribed as an emanation of eternal light, an "immaculate mirror of God's activity," and as "the voice of the Lord."

Sophia-Achamoth is a very high spirit, an emanation (along with her consort, the Christ) of her mother, the Elder Sophia.

Just by sheer contact with matter, she produces a being -- an odd, lion-faced entity, whom she calls Ildabaoth (Ilda, child; Baoth, chaos).

When she sees the imperfection that she has produced, she escapes from the lower space and builds a strong barrier, or veil, between the world of spirit and the world of matter. Ildabaoth is, therefore, the "son of darkness" who cannot see that there exists anything above him.

Ildabaoth has captured some of the pure light from his mother Sophia-Achamoth. In his domain he produces seven sons, -planetary beings.

In his great ambition Ildabaoth decides to create a man after an image he had seen reflected in the waters of space, but the creature proves a failure. So he is forced to call on the help of his mother who sends him an impulse of divine light. This animates the man and he rises to life.

But seeing the newly made creation soar higher and higher because of the spiritual light from Sophia, Ildabaoth flies into a rage of jealousy.

Angrily staring into the deep abyss of matter, his image is reflected back to him and there arises a serpent with eyes flashing red. It is Satan, the Ophiomorphos (having the form of a serpent), an embodiment of envy and cunning.

After this Ialdabaoth encases his creations, symbolized in Adam and Eve, in mud to keep them closely tied to the earth. He builds for them the Garden of Paradise, giving them all of the gifts therein. But lest they taste death, he forbids them to eat of the Tree of Knowledge of Good and Evil.

Sophia-Achamoth, from her kingdom above, is always watching over and protecting humanity.

Seeing the world that Ialdabaoth has fashioned, she sends her own serpent, the Ophis or Agathodaemon (a divine instructor), who induces Adam and Eve to taste of the forbidden fruit of knowledge.

Though they are cast from the Garden of Eden, and do indeed learn the sorrow of death, the divine wisdom stays with them through every trial of worldly life.

In the final act, after watching mankind struggle through aeons of pain and conflict, constantly pursued by Ialdabaoth's cunning, Sophia-Achamoth begs her mother, Sophia the Elder, to send the Christ to help humanity in its unending torment.

It is through his crucifixion and resurrection that the kingdom of matter is finally subdued and Ialdabaoth's reign of blindness comes to an end. From his throne in the heavens the Christ continues to reign, collecting all of the souls who have triumphed like him, each one freeing a portion of light encased in the kingdom of matter.

Have you ever wondered about that gorgeous woman in Michelangelo’s painting on the ceiling of the Sistine chapel—the one that God has his arm wrapped around while his other arm extends to touch the hand of Adam?

Some art historians believe the petite blonde was Jehovah’s grandmother, the Goddess Sophia. In the Judeo-Christian tradition the goddess Sophia is the beginning, the source of wisdom, and keeper of the knowledge of all that is righteous and just. With her sound wisdom and guidance, rulers lead their kingdoms to prosper. In the darkness and ignorance that thrive in her absence, the proverbial wasteland eats away at the soul and nations perish.

Known as the Mother of All or simply as Wisdom, Sophia was born of Silence according to Gnostic creation myths. She gave birth to both Male and Female who together created all the elements of our material world.

Female then gave birth to Jehovah in all his emanations. But she also gave birth to Ildabaoth who was known as the Son of Darkness. When humans were created, Sophia loved them all dearly.

Unfortunately, her affection for humans sparked jealousy in both Ildabaoth and Jehovah. Hoping to keep humans weak and powerless, the brothers forbade humans to eat the fruit of the tree of knowledge. Female then sent her spirit in the form of the serpent to teach the humans to disobey the envious gods.

Sophia so desperately loved humans that she decided she would live among them. To her dismay they mostly ignored her. She tried speaking to them. When they turned a deaf ear, she screamed from the tops of the highest walls. Still she was not heard.

In her anguish at being so neglected, she left humans with one last thought: You have denied and ignored me, so will I do when calamity strikes and you call for my help. Only those who earnestly search for me and love me will merit my love and assistance.

There are those who believe that Sophia, so desperate in her desire to relate, later returned to humans in another attempt to bond with them. Sophia is often symbolized by the Dove of Aphrodite, which later became the dove representing the Holy Spirit.

The dove appeared to the Virgin Mary in the form of the Virgin of Light, entered her and conceived Jesus. In this sense, Sophia attempted again, in to form of a man, to be united with the mortals she so loved.

Sophia’s traits include: righteous, wise, loving, communicative, knowledgeable, creative, protective, giving, and truthful.A Sophia woman sees it and tells it as it is; she has no fear of the truth.

She brings meaning to human experience with her gift of understanding “the bigger picture”. Only when you stand back, gaining some emotional distance, can you see that even the most traumatic experiences can be the birthplace of your most treasured strengths. It is only in times of great stress that heroic feats are truly appreciated.

Sophia was also the mother of Faith, Hope, and Charity. They are Sofia’s gifts to us,  gifts that can overcome the despair, confusion, and suffering that frame human life. Sophia reminds you that clear vision and understanding line the path that leads to the discovery of the meaning of your life.